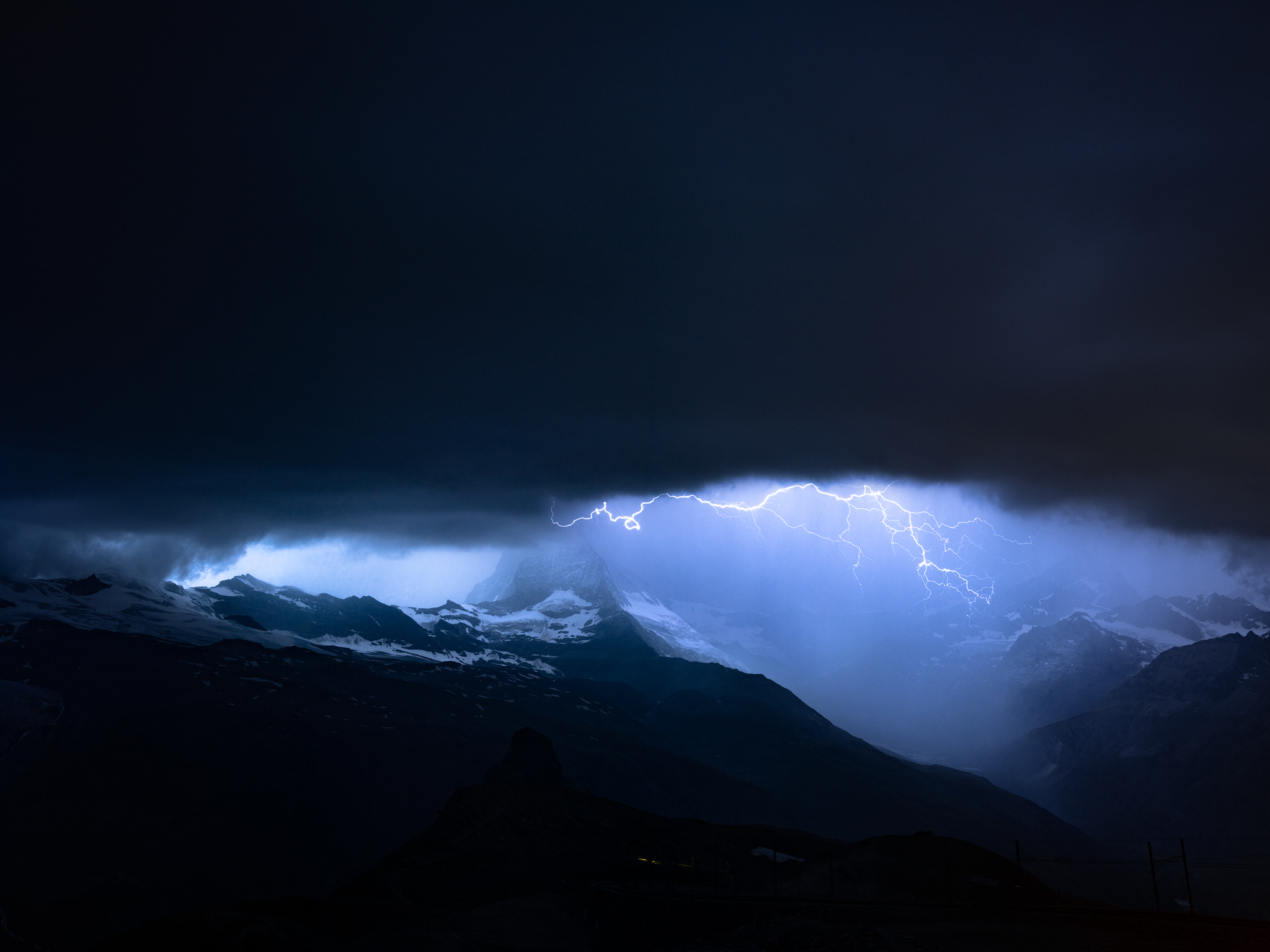 Shooting at night is very exciting. Shooting at night alone is even more exciting. Because except fighting with external demons, you have to fight the inner ones as well.
I felt safe being at 3100 meters above sea level. As you may know, the most dangerous demon is human. There were no people. Those few, who stayed over in the hotel, had been already sleeping. The others returned to the city by the last train. That’s why my biggest fear gave way.
So, after having fought my external demons, I concentrated on a composition. Despite the forecasts, there were thunderstorms around. I write “around” intentionally because there was a single calm cloud above me but the rest of the sky flashed and rumbled.
I should mention that I am afraid of a thunderstorm. When I was a little girl I locked myself in the bathroom not to see or hear anything and was shaking there until the thunderstorm is over.

Getting older I stopped shrilling from the sight of lightning because people were staring at me. I mean, I didn’t overcome that fear, I just became more polite and scream inside my head.

Of course, inner demons were happy with the existing situation, but after a short conversation, we’ve managed to come to terms. My love for the photography won and I even was able to normalize my heartbeat to common rates.
While I was composing a beautiful shot with the Matterhorn and lightning strikes hitting its peak, black flies arrived. Some midgets, which bite like mosquitoes, but they are too quick to catch and swap. Moreover, they were biting me only in the forehead. Perhaps, all other parts were covered. Black flies distracted me from the composition and didn’t fly away, although, I was waving my arms around, flapping myself in the forehead and even puffed cigarette smoke
right into them (they say, flying beasts fear it). Until I suddenly realized, that there were no midges… I felt like something was crawling on my forehead, but there was nothing on it.

I’ve never jumped with a parachute. But I am sure – the amount of adrenalin you get after jumping and after realizing that you were fighting with non-existent insects are nearly the same. You seem to be in the right mind but it’s not for sure. Even thunderstorm demons went nuts and kept it silent. Having admitted that I didn’t run mad, I started groping my forehead. And was surprised to discover that my hair were standing up. Really up and every single one… It struck me, that I was a perfect lightning rod. Demons were triumphing! I was the highest object in the surroundings and was holding a camera in each hand mounted on a metal tripod!
Such a Thor from comics. All I had to do was to raise my hands and say a spell. And I ran away. I had never run so fast neither from animals nor from people. I even didn’t finish exposing and that looked nothing like me at all. Yeah, the Milky Way failed that day. But now I can say for sure if you dream to jump with a
parachute, you should just join my shootings, I guarantee the same experience but for free.

Receive our catalogue by email:

All rights reserved. © 2018-2020 adm.photo.
Scroll to Top
Menu
We use cookies to give you the best experience on our website. If you continue to use the site, we will assume that you are satisfied with it.OkPrivacy policy